Branch Development on Squamata Juniper
I will start this article with the statement that everything written here is based solely on my own experience and observations, here in middle England, with Meyeri and Blue Carpet cultivars and that I have no formal training in horticulture.
What prompts me to write an article on such a specific subject?
Having taken part in a recent styling contest and the subsequent voting on the completed entries, I could see that many of the entrants seemed to have difficulty with styling the branches on junipers that have needle foliage.
Admittedly, to develop mature looking branching and foliage clouds on these junipers is not a short-term project, but with a little work, convincing results can be achieved from the outset.
I normally start this procedure in mid to late spring, about three weeks after the new growth has started to push out.
Lets start with a few vital pointers:
So, how do I go about making a reasonable start on developing a good branch framework?
The way I went was to look at how branches develop on full size specimens.
In general, squamatas have dense foliage, leading to the foliage on the innermost branches to be deprived of light and air.  This causes the needles to die and eventually fall off.  Growth is generally strong on top and at the tips of the branches where good light is available.
My thought was that I could use these observations to my advantage if I could speed up this process.
Picture 1 shows a typical Squamata branch with its congested branches and needles.
(Picture 1.) 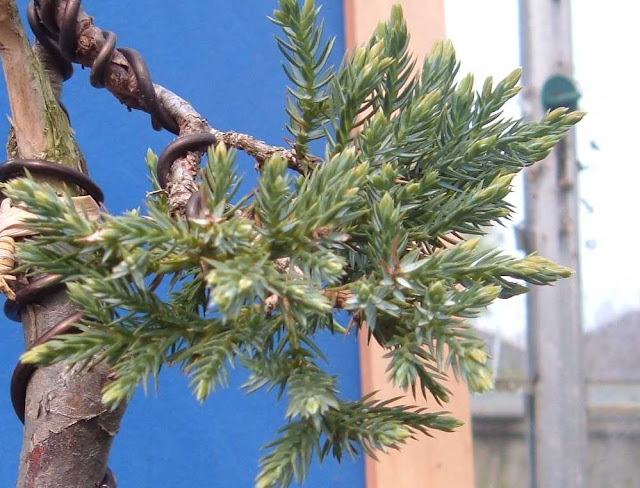 It would be virtually impossible to wire this branch as it is and achieve a satisfactory result.  To be able to make this branch more convincing, I will have to simplify it and reveal the structure of the secondary and tertiary branches contained within this tangle.  To do this I simply mimic the effect that lack of light would have on the needles; I remove them.
This is where sharp scissors and a lot of patience come in to play.
I carefully separate the individual branches and start cutting out the older needles starting from the area closest to the trunk and work towards the tip of the branches and stop when I get to within about 5 or 6 sets of needles of the growing tip.
The needles are cut one at a time and as close to the branch as I can manage.
I remove any very weak shoots as I go and cut out any new shoots that grow from the crotches of branch junctions, being careful not to cut in to the small branches.
This is tedious work so allow time and take some breaks.  I usually do only one branch at a time.  The cleaning out of the old needles on this branch took about 2 hours.
Picture 2 shows the same branch with most of the older needles removed. 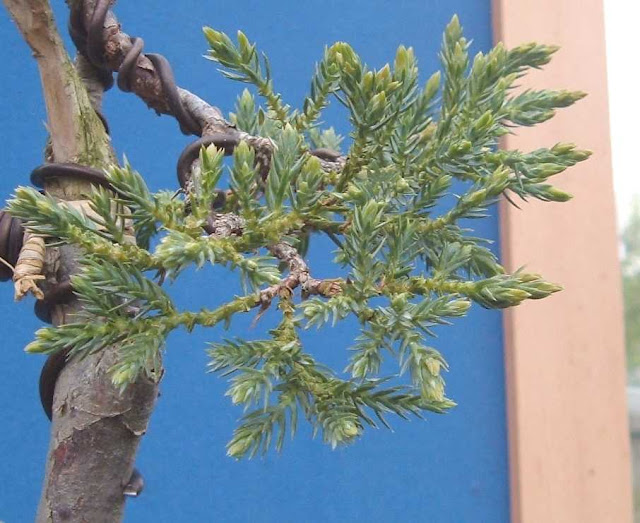 I can now clearly see what I have to work with.  Now it’s decision time as to which of those branches and shoots to keep.
In general, I would remove anything that is opposing another branch and anything that looks weak.  Everything else stays until the wiring is complete.  I like to have plenty of choice when I come to the final placement of the branches.
For the purpose of this article I will assume that you are familiar with basic wiring techniques.
For the wiring on this branch I used 1mm copper coated aluminium wire, as all the branches were quite small and this is an exercise in positioning rather than bending.
Great care must be taken when applying the wire, as these little branches and shoots will easily snap of at the point where they are attached.  This is another good reason to leave as many as possible until the wiring is complete.  I lost three of the shoots during the wiring on this branch.
It is not necessary to wire every little branch in this initial styling. But enough wire should be applied to be able to fix the majority of the branches in place.
Once the wiring is completed, the branches and shoots can be arranged.  The aim is to give maximum light exposure to the growing tips while preserving a natural look to the branch.
A simple fan shape would suffice for the light requirement, but it would not look convincing as a branch arrangement.  I usually arrange the branches in layers and introduce some severe bends in the process.  These small branches are quite flexible and will take almost any shape.  The secret is to give good support while bending them in to position.  As mentioned before, they will easily snap at the point of origin.
Picture 3 shows the wired and arranged branch. 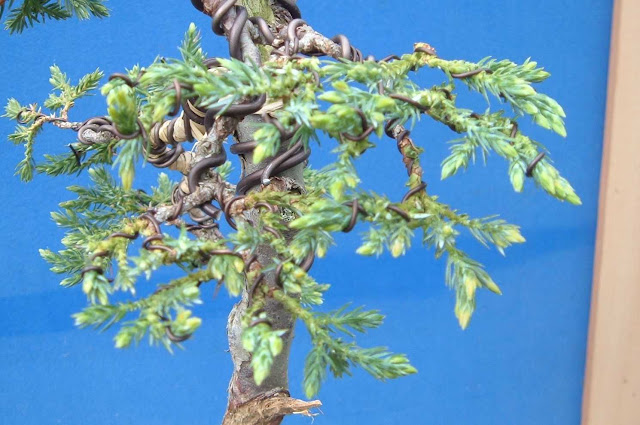 This tree will now be allowed a period of recuperation, with a good watering and feeding regime.  I would opt to keep it in full sunshine on anything but the hottest days.  It will not look its best for a few weeks, as the remnants of the cut needles will turn brown and wither.
From now it’s a bit of a wait until the little branches have set in place and the wire can be removed.  Depending on the tree this can take the full growing period.  During this time I carefully pinch out new growth if I feel that a particular branch is growing too strongly.
Picture 4 shows a branch that has been treated in the same way last year.  It is about to have the wires removed for further refinement to begin.
(Picture 4) 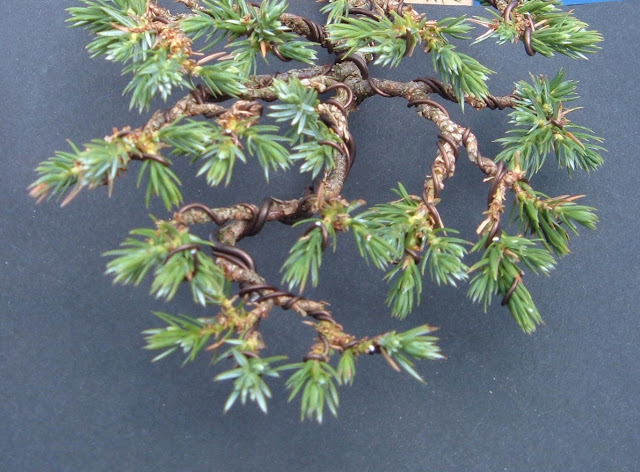 What remains now is to train any new shoots upwards to form the foliage pad above the branch framework.  Pinching new growth will promote lots of buds with short internodes to fill out the foliage pad.  Another two years and this one will be ready.
I hope this articles was of help to some of you.  Feedback and comments would be greatly appreciated.
Posted by Unknown at 14:29