It may be interesting for some to follow the full process of the initial styling of a basic Garden Centre Plant and see the transformation in to a potential bonsai. 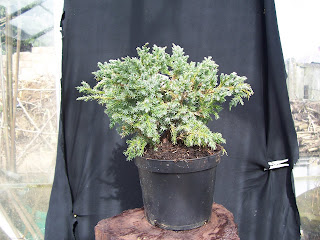 The competition ran from the end of March 2010 until the end of April 2010 and centred around styling a nursery plant costing no more than £20, that had no previous bonsai training.  Having  trawled my local Garden Centres and nurseries over a weekend,  I ended up choosing a little Juniper squamata "Blue Carpet" to work on.  The choice was really governed by the limited availability of material due to the continued cold spell of weather.

The first task was to clean out any dead foliage and find the where the actual roots of the plant were located in the pot.  Many people will be surprised to find how deep some of these plants are potted.  The actual root to trunk junction could be half way down the pot. 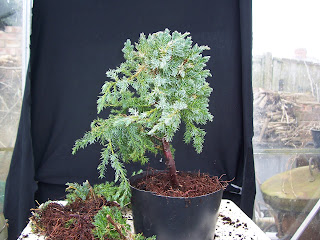 I removed about a third of the plastic pot by trimming it with a pair of garden scissors and started to carefully scrape away the soil.  I removed any fine roots emanating from the trunk as I went and finally found the main roots.  Typically for these young Junipers there were no strong buttress roots, but rather a bunch of fine roots coming from the trunk in a clump.
Cleaning out the foliage followed.  I removed any dead foliage and branches and then moved on to remove any weak growth that would not be strong enough to wire. 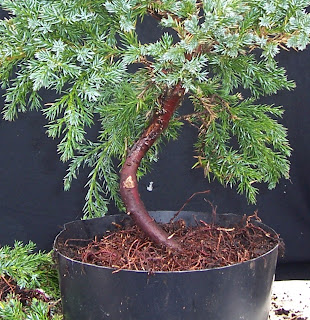 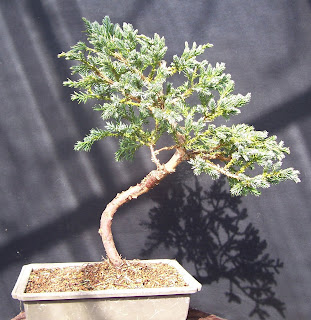 Having tidied up the plant, I could now see the trunk line and available branches in order to determine my styling options.  The trunk had a nice curving line, but was very thin in relation to the foliage canopy.
There was no discernible taper and any useful branches were in the upper third of the tree.  This combined with the poor root  spread severely limited my options.

I decided to leave the tree overnight and come back to it in the morning with fresh eyes and maybe some new ideas.

I was still as clueless  in the morning and decided to place the tree in to an aproximation pot without removing any more roots and clean the tree up some more in order to further narrow down the options.  I studied all sections of the trunk in relation to the trunkline and aiming for a triangular shape, I eliminated any opposing branches and any finer branches that I thought would play no part in the final image.
This finally gave me a tree like image, although with a lot left to be desired.

So, what were my options at this stage.
Option 1: Literati- remove all but the top few branches and wire in a few severe bends.  Maybe add a spiralling shari to the trunk.

Option 2: Informal Upright- Enhance and tighten the bends to bring the foliage closer to the soil line and then wire the foliage pads so that they would hopefully hide most of the trunk.

I could really not see any other options at this stage and went to look at some of my bonsai books to get some inspiration and that was when I came across the third option.  What about a Tanuki or wrap around?
I have a good collection of odd pieces of driftwood, so I decided to explore this further. 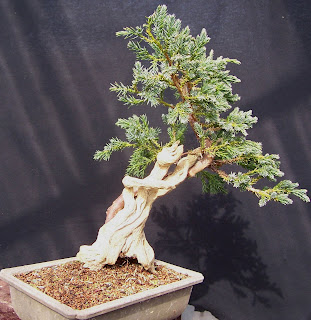 I found a suitable piece of just the right size and tried this with the tree to see if it would make a convincing image.
As it turned out, the movement of the deadwood complemented the trunkline more or less perfectly and would allow me to keep working within the framework of branches I had retained.

It would involve however a major trauma to the tree in order to be able to show a live vein of wood from the front view.  That is I would have to split the trunk along a line to just above the roots in order to feed half of the trunk through the hollow section of the trunk and run the other half along the back.

I would not normally consider this treatment for a new tree, but with the relatively low cost of the material, and considering that this was a young and vigorous plant, I decided that I would risk it for this tree. 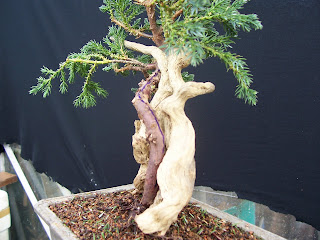 I carefully marked a line along the length of the trunk that closely followed the contours of the deadwood.
This would guide me when splitting the trunk and make sure that the live wood would match as closely as possible, making attaching it to the dead wood as easy as possible. 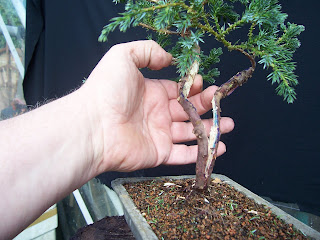 I don't own a trunk splitter, so I used my concave cutter to carefully split the trunk along the marked line, making sure that the split ended up above the roots in such a way that both halves of the tree would have sufficient root to support the foliage on that half of the tree. 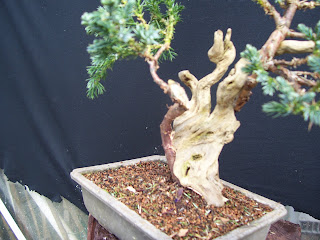 I then placed the dead wood in to the split and checked the fit.
I had to make a small adjustment to the hollow section at the bottom of the deadwood in order to be able to feed the live vein through without having to bend it too severely, which would risk separating the bark from the wood causing major risk that this half of the live wood would die.
It was at this point that I realise that I should have marked the split line along the front of the deadwood, as this would be the side to be seen.  Live and learn! 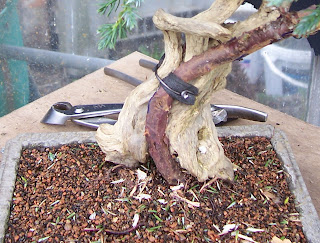 On to attaching the live wood.
There are a few ways of doing this.  I could have used brass screws screwed through pre drilled holes in the live wood in to the dead wood every couple of inches.  While that would give me a good fixing, it would also risk interrupting the flow of sap.  Also, I could not find any screws that were thin and long enough to work, so I decided to wire the live wood to the dead wood, protecting the bark with a rubber padding..  While this is quite obtrusive, it gave me a good fixing.
I had to drill a small hole through the dead wood for the lowest wire. 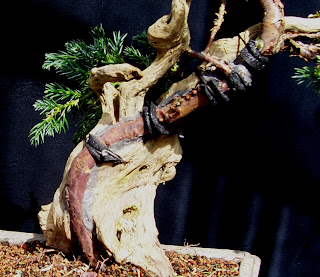 The other wires were just brought around the deadwood.  Any visible edges of the split trunk were sealed with Kyonal cutpaste.  I would have preferred to use grafting wax, but the tub I had had dried out and was no longer usable.

I trimmed the rubber padding as closely as possible to the wires to reduce the visual impact on the final image. 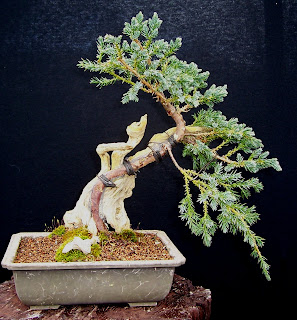 With the tree now firmly attached to the deadwood, it was time to wire the tree ready for branch placement.  I generally keep a lot more branches than will be required for the final image, and apply wire to every branch starting with the trunk and strongest wire working towards the top and outer edges with diminishing wire size.
This allows me to place the branches in to their positions and then decide which ones will be required to obtain the final image.
I work on the principle that it is easy to cut more branches off, but very difficult to put more branches on if you find you need them. 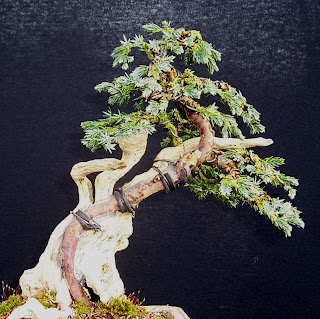 With the wire applied, the branches were roughly placed in to position to produce a pleasing outline in proportion to the trunk.  This included a lot of severe bends to foreshorten some of the branches in order to bring the foliage closer to the trunk.

Again, I was aiming for a triangular outline to the canopy while following the general movement of the tree towards the right. 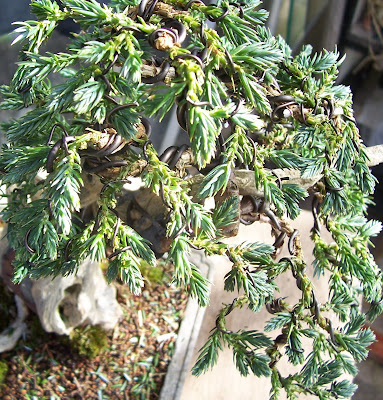 Once the general shape was established, the detailed placement of the small branches defined the foliage pads.

This was quite a fiddely operation and the detail wiring paid off at this stage.

I removed about another third of the remaining foliage during this stage as it was not required for the final image. 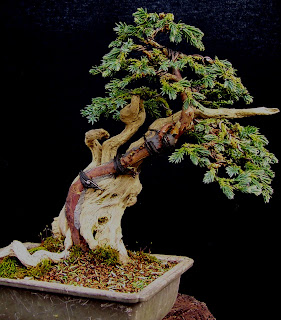 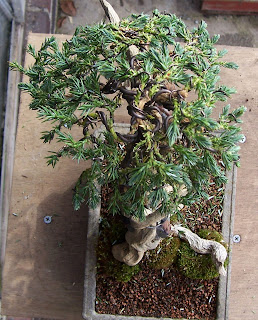 The tree had now been transformed in to a good potential bonsai and would require a period of rest to recover from the initial styling.  There is always the risk of overly stressing a tree by performing too many procedures in a short period of time.
The tree was now left in an unheated greenhouse, out of direct sunlight. I misted the tree daily and made sure that the soil remained uniformly moist.  As very little work had been done on the roots, I applied a weak solution of fertiliser to help the tree regain some strength.

After two weeks, the tree was looking healthy and the shoots on the growing tips were pushing out new growth.  Only one of the small branches at the back of the tree  had not survived the severe bending and had to be removed.  This required me to adjust the branch placement of the apex and back branches to cover the area left bare by the removal. 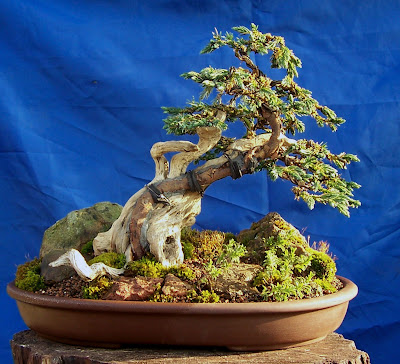 I shortened the long straight jin pointing to the right, as it disrupted the general flow of the foliage and
I decided to pot the tree in to a shallow oval container, but chose a slightly oversized pot, as I did not want to remove any more root from the tree.  This meant that I had to add some rocks and ground cover in order to fill the empty space in the pot, and the whole arrangement took on more of a landscape feel than I had originally envisaged.

Overall I am pleased with the outcome of this first styling.  It will now take a few years of growing and pinching in order to fill out the foliage pads and for the live wood to graft itself to the dead wood.

I will eventually repot this tree into a smaller pot, but for the time being, I will leave it in this container to promote strong growth.

Here is my final submission photo 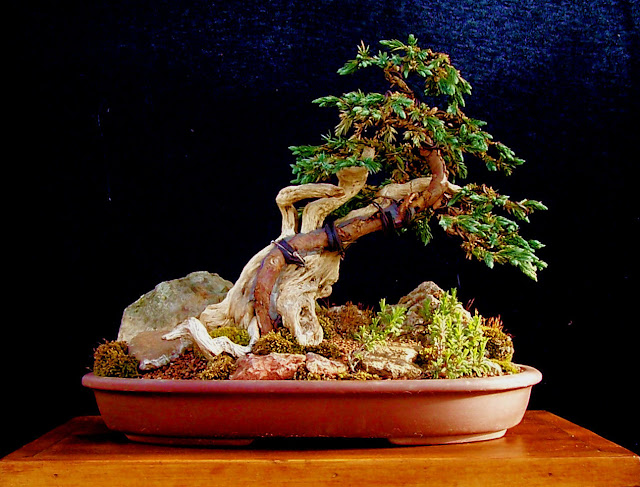